International Women's Day has become recognized as a day to celebrate how far women have come in society, in politics, in economic achievements, in our workplaces and last but not least, in our union (The Roses of IWD) 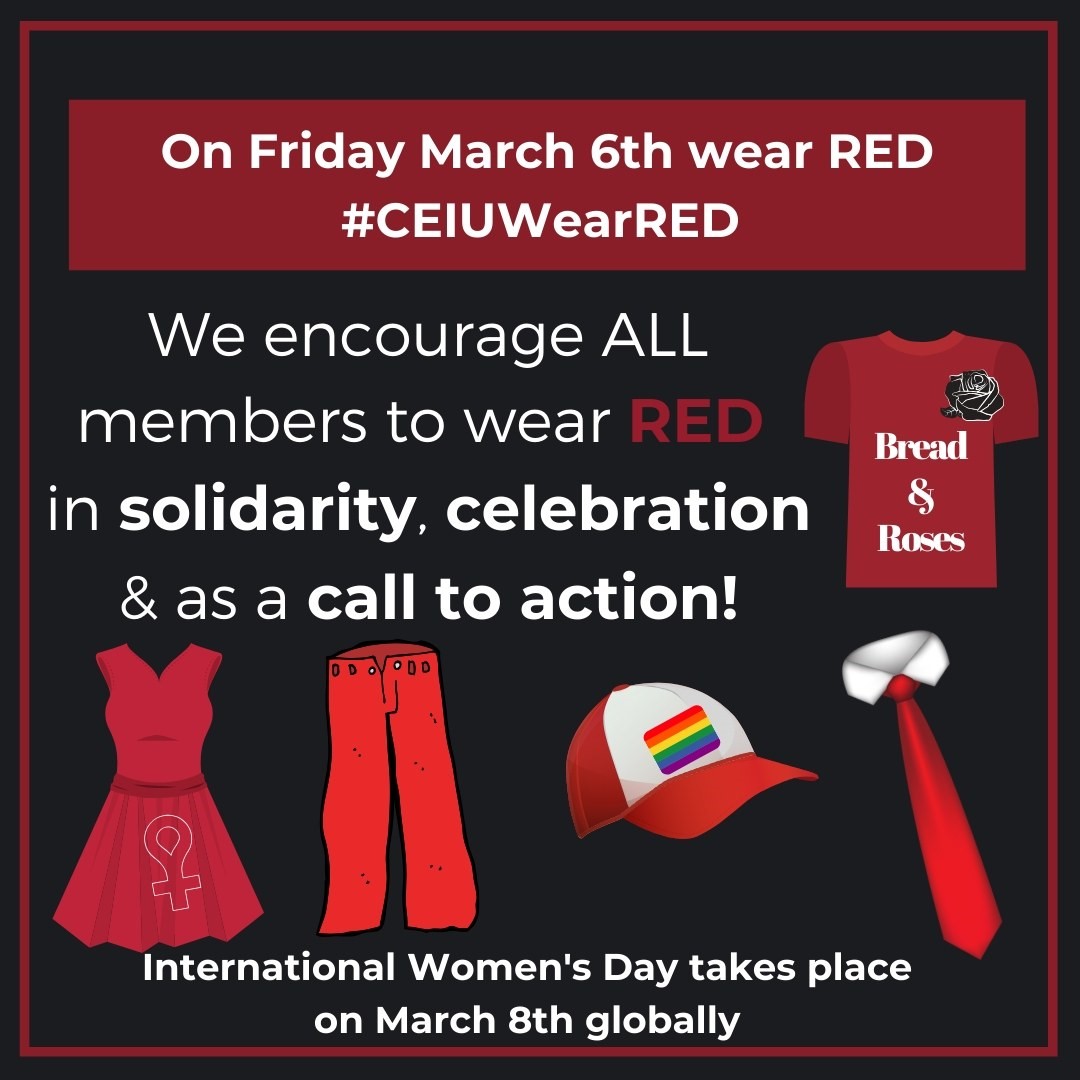 The political roots of this global day mean strikes and protests are organized to raise awareness on various aspects of continued inequality (The bread of IWD). “Enough is enough. The status quo clearly isn’t working for women, and it’s definitely not working for First Nations, Métis, and Inuit women, women of colour, Muslim women, disabled women, women living in poverty, non-binary folks, and lesbian, bisexual and transgender women. So let’s change the status quo! This isn’t something that will magically happen. It’s something that each one of us has to work towards every single day.”

Ways you can resist:

Every action you take helps to create a more just and equal world!

Ways you can celebrate:

Women’s programs & positions are an integral part of CEIU; they are enshrined in our union’s structure and are a cornerstone of CEIU’s commitment to Equity.

On Friday March 6th we are asking that all members wear RED as a sign of SOLIDAIRITY with women-identified people around the world! Take a photo of yourself wearing red and share it on social media using the hashtag #CEIUWearRED. If people ask you why you’re wearing red, let them know you’re standing in solidarity with the women around the world.

Why RED? We recognize it has been used by other campaigns and we feel it is a sign of SOLIDARITY.  Wear Red is an action in support of Women's Health and Heart and Stroke Disease, #HerHeartMatters. For Indigenous Women, as part of the MMIW campaign, Series A Stars wore red face paint in a campaign to tackle violence against women. Red represents the rose in Bread and Roses. Red is used in solidarity with Education Workers, a field where women are predominantly affected. The list goes on.  Red builds your self-esteem and confidence, leading to empowerment, so do it for you... wear Red.

As we go marching, marching, in the beauty of the day
A million darkened kitchens, a thousand mill lofts gray
Are touched with all the radiance that a sudden sun discloses
For the people hear us singing, bread and roses, bread and roses.

As we come marching, marching, we battle too, for men,
For they are in the struggle and together we shall win.
Our days shall not be sweated from birth until life closes,
Hearts starve as well as bodies, give us bread, but give us roses.

As we come marching, marching, un-numbered women dead
Go crying through our singing their ancient call for bread,
Small art and love and beauty their trudging spirits knew
Yes, it is bread we. fight for, but we fight for roses, too.

Quoted above in the statement is from Amnesty International

Bread and Roses: This political slogan coined by American socialist and feminist Rose Schneiderman. She famously said women in low-paid jobs need more than just bread - the basics in life - to survive. They also deserve roses - dignity, respect and the opportunity to flourish.